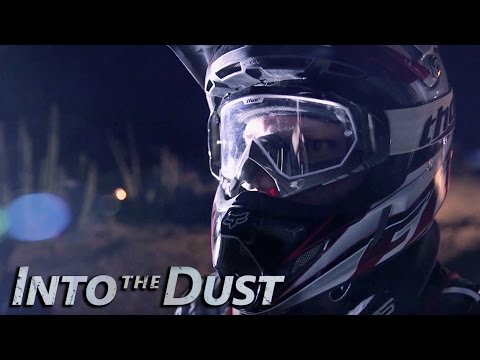 Its the story of a father a son team completing the Baja 1000 in the Sportsman class. They spent a considerable amount of time and money preparing for the event. Being one of the toughest off-road races it certainly test the resolve of man and machine as well as the supporting team. The father and son would switch sections and during one night stage, the son was considerably late at the scheduled stop. It turns out that the son had crash earlier in the section braking off his front brake caliper. Left dangling off the brake line, the caliper would get caught in the spokes of the front wheel. There was no way he could ride that way, so he improvised. With much time and effort, he ripped the sleeves off his jersey and used the detached sleeves to tie the caliper away from the front wheel so he could keep on riding.

While a clever solution, this left me with a WTF moment. If the rider had access to a couple zip ties or some duck tape, it would have only taken a minute to secure the caliper and get moving again. The big question is why didn't he have some basic things with him?

For some reason, they did not carry a small tool kit. But even without a tool kit, some basic items should have been available.

Before you set out on your next adventure do these simple things. Under your seat, or behind the panel covering the airbox, behind the headlight, or any other area that you can get to easily, simply stick on a decent length of duck tape. Layer it up with several pieces. Stick the seat or cover back on and forget about it. That is forget about it until you need it. Like when your helmet visor gets broken on a tree branch, or you break off a rad shroud. Rip off a few strips of tape from your secret place, apply and you are good to go again.

Do the same for zip ties. Tape a bundle together, and zip tie or stuff it somewhere out of the way on the bike. The make it even more usefull, wrap a few meters of electrical tape around the bundle. Pull off a strip of tape you need when you need it.

These simple ideas take no weight or space on your bike and could make life a little bit easier when something bad happens.